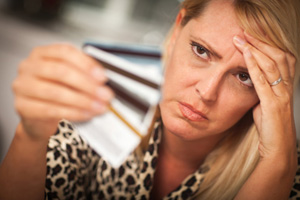 There are various types of debt that a person can rack up. But, Credit Card Debt and Depression is scary. There’s what’s considered long-term debt, which is characterized as bank loans, student loans and mortgages. There’s mid-term debt, such as auto loans and personal loans. And then there’s short-term debt, such as credit card debt and overdue bills. According to a new study by the Institute for Research on Poverty and the Center for Financial Security at the University of Wisconsin, it’s this short-term debt that researchers have found is linked to depressive symptoms, especially if the individual is single, near retirement or uneducated.

And if you think about it – the results make sense. Long-term debt, such as a mortgage, can be thought of as an investment. So can mid-term debt, like student loans – it’s essentially debt with a purpose. However, lofty credit card debt and overdue bills – in this study, overdue bills are characterized as being more than two months late – more reflect one’s financial irresponsibility.

The study measured 8,500 consumers over two time periods, from 1987 to 1989 and then again from 1992 to 1994 through the National Survey of Families and Households. The two time periods reflect spans where unsecured debt escalated in the United States. Respondents were asked to identify how many days per week they felt 12 depressive symptoms, of which a significant relationship was discovered between depressive symptoms and short-term debt, especially of the unmarried, near retirement or uneducated crowd, of which limited resources might exist for breaking out of such habits.

One important to consideration about this study is that depressive symptoms and clinical depression are not the same thing. So, it’s not accurate to say, according to this study at least, that those with short-term debt are more likely to be depressed. Depressive symptoms include the likes of:

Another important factor to take into consideration regarding this study is that it was conducted well before the national mortgage crisis and subsequent economic recession of 2009, when long-term debt was the pitfall of many people’s difficulties and many were forced into filling for bankruptcy as a result. That’s not even taking into account how much student loan debt, mid-term debt, has ballooned over the past two decades. So while this study links short-term debt with depressive symptoms, it’s a good bet that if it was held during other years, say 2009-2011, long-term debt and mid-term debt would also likely show some sort of correlation.

Regardless of what you make of this study, you shouldn’t take short-term debt lightly. For instance, payment history is the single largest factor into the makeup of your credit score. Failing to pay bills on time can directly impact that – and not for the better. Excessive credit card debt can also be a credit score killer, as generally it’s advised to keep such debt under 30 percent of your total credit allotment in order for your credit score not to take a dip.