Most Notable Homes Ever Sold – Top 10

While most of us are very happy with the three bedroom, two bath American home, others are looking for something a little different. Read on for some of the most unusual homes offered for sale in recent years: 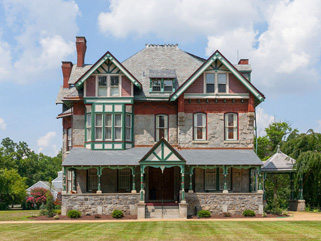 2. An invitation to the ball at Hearst Castle. Invitations to the home, built in 1919 for newspaper magnate William Randolf Heast, were highly coveted. Guests could visit the stables, swim in the many pools or watch films in the on-site theater.

3. Heavenly digs. In Portland, Oregon, you can live in a converted church. Updates to the property involve a loft bedroom and a Japanese soaking tub. As a bonus, taxes on the property will remain frozen until 2016.

4.Remember the Alamo? There is a house in Spicewood, Texas which has an exterior that is a perfect replica of the famous fort. Don’t worry, though, it’s all modern inside. There’s even a hangar for your private jet.
http://estately.com/listings/info/500-contrails-way

5. If you had a time machine and $135,000, you could have purchased one of the world’s most famous unusual homes, the Winchester Mystery House. Sarah Winchester, the widow of the creator of the Winchester rifle, built onto the house continually during her lifetime in the belief that it would appease the spirits of people killed by her husband’s creation. The house was put on the market after her death in 1923 and opened as a museum soon after. http://en.wikipedia.org/wiki/Winchester_Mystery_House

6. Were you born in a barn? It’s the question on most parents’ lips when their kids fail to close doors coming or going from the house. But, if you bought one unusual home in Argyle, Texas, you’d have to take this plea out of your repertoire. The house is a 10,000 square foot barn; however, despite it’s large size, living quarters are still pretty tiny. The finished area is only the size of a studio apartment. http://estately.com/listings/info/1820-e-hickory-hill-road-e

7. You think you have problems with your neighbors. George Lucas’s neighbors have consistently resisted his development of his Skywalker Ranch, saying that it would increase pollution, block their views and bring unwanted traffic. The ranch, which he started buying parcel by parcel in 1978, covers 4,700 acres. http://en.wikipedia.org/wiki/Skywalker_Ranch

8. Not so haunted house. George and Kathy Lutz became wealthy and famous after The Amityville Horror was written about their supposed experiences at 112 Ocean Avenue in Amityville, New York. Later residents of the house changed the house number and removed the iconic eye-like upper windows to discourage curiosity seekers. No residents after the Lutzes reported paranormal happenings in the home. http://en.wikipedia.org/wiki/File:Amityville_house.JPG

9. Did you covet Cameron’s house in Ferris Bueller’s Day Off? If you have a million dollars and a tolerance for tourists, it could be yours. The current owners have tried to sell it since 2009. http://redfin.com/IL/Highland-Park/370-Beech-St-60035/home/17625146

10. One notorious home where you can’t live: the Tate Murder House. The property where Sharon Tate was murdered was bought and sold numerous times. But, Roman Polanski is rumored to have paid $1.5 million to have the house destroyed. It was bulldozed in 1994 and the address changed.