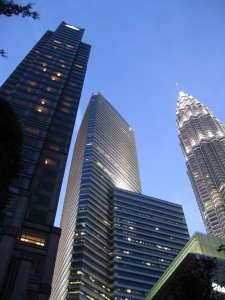 Malaysia is one of Asia’s most indebted countries, but only a small portion of the country’s citizens has access to credit. TransUnion, Experian and Fair Isaac Corp. (also know as FICO) are partnering with Malaysia’s credit reporting agency to found a new scoring system that will give a far greater portion of the country’s people access to credit.

Malaysia’s levels of borrowing are high for Asia; household debt is equal to just under 87% of the country’s GDP. But, this credit is only spread among a very small portion of the population.

In the World Bank’s June rankings for ease of credit, Malaysia ranked 23. The U.S. ranked 2; China ranked 71. About 11% of Malaysians took a loan last year; around 12% have credit cards. By contrast, 20% of Americans have an installment loan of some kind, and around 62% have credit cards. At least one major bank has raised the minimum income requirements for getting a loan or credit card, making it even more difficult for many people in Malaysia to qualify for credit.

As things stand now in Malaysia, many banks use their own internal programs for credit scoring. But, the models used don’t offer a lot of versatility. “Whether you pay your bills on time or not, the interest rate is pretty much the same,” said Dawn Lai, who is the general manager of credit-reporting agency Ram Credit Information.

Ms. Lai’s agency is partnering with Experian to provide a standardized credit-scoring model that can be used by financial institutions throughout the country. Under the new system, people who are higher risk will be able to take out loans but will be granted lower credit limits or higher interest rates. By better calculating risk, banks can more comfortably loan to larger portions of the population.

FICO is also developing a scoring model to be used in Malaysia. The scores will range from 300 to 850, as they do in the U.S. system. Higher scores are better. The scoring will take into account the length of a borrower’s credit history and whether the borrower has demonstrated an ability to pay bills on time.

Another factor affects the way that many people in Malaysia use credit. The population of Malaysia is 61.3% Muslim. Followers of Islam are not permitted to collect or pay interest under Shariah law. This is both because of the risks of usury and the risk that come in the form of variable interest rates. Many people who are Muslim avoid credit cards, opting instead for debit cards or cash. However, credit cards offer a degree of flexibility that many people desire.

Banks that wish to reach this audience use alternatives to interest when extending credit. In some cases, the bank will offer a line of credit and charge a monthly or annual usage fee that is tied to the amount of money that is owed. In others, customers can use their credit cards to buy items. When the transaction goes through, the bank will instantly purchase the item and then resell it to the cardholder at a higher price that is paid when the credit card bill is due. Some Sharia-compliant credit cards work in a lease-purchase situation; the customer is technically renting to own items bought on the card until the balance is paid off.

However, not all credit cards offered in Malaysia are bound by these requirements. Sites that rate Malaysian credit cards also list reward cards, cash-back cards, low interest cards and cards for new borrowers who have little credit history. There are no limits to the number of cards a person in Malaysia can hold. There is a limit of two card issuers per person.

Credit cards make it easier for people to shop, but, that is not the limit of their advantages. People who use credit cards have better protections against fraud than people who stick with debit cards only. When renting a car or a hotel, the deposit does not have to be paid in cash. And, many cards, including those being offered in Malaysia, offer perks such as cash back, airline miles, discounts and other services. By making it so that more people in the country can borrow, if they choose, the new credit-scoring partnerships gives people more flexibility and better opportunities. In the eyes of many commentators, this is not just good for individuals, but will also increase financial opportunities and expand the Malaysian economy as a whole.